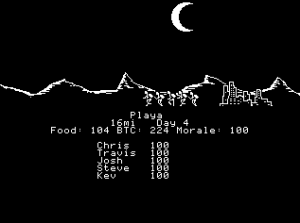 Desert Hike EX is a game I wrote content for at the San Francisco Indie Game Jam last weekend.

You can play it here.

I wrote the first draft of the text for this game in basically under 24 hours. I spent the first half of the jam writing a completely different set of content before we decided to switch our theme to Bay Area startup culture.

We actually won two award categories at the jam with this game (no prizes, though): “narrative excellence” and “outside-the-box use of theme.” The theme of the jam was randomly selected from Wikipedia and ended up being “The 339th Flight Test Squadron,” an American air force group from Georgia. There are a couple of events in the game which reference this flight test squadron. (I was actually pretty disappointed with this method of selecting the theme, but it worked out OK.)

Our team was actually quite big, but things went very smoothly. Other team members were Jim Crawford, James Hofmann, Matt Rasmussen, Duncan Robson, and Stevie Hryciw. We also had a shit ton of beta testers I never met.

This was one of the most rewarding game jam experiences I’ve had so far. The jam organizers did a great job.