This is a post in a collection of posts calaloging writing I did for the games site Zam.com, which later became ReadySet. I edited Zam.com from late 2015 to early 2018. ReadySet is shutting down today and I am republishing some of my writing to preserve it.

I wrote this in February 2016. It was eventually accompanied by a very funny video produced by Danielle Riendeau.

I have now finished The Witness, which means that I am very cool and also smart. Unfortunately, The Witness takes place on an island filled with people who are not cool at all: the statue people.

For the world’s most extremely, very Buddhist videogame, there sure is a lot of anguish in The Witness. There are like 50 statue people on the island and I’d say that maybe half of them are definitely in the ‘tearing clothes and gnashing teeth’ category of sadness. So I’ve collected the best ones here — these are the saddest statue people in The Witness, arranged in increasing order of sadness. 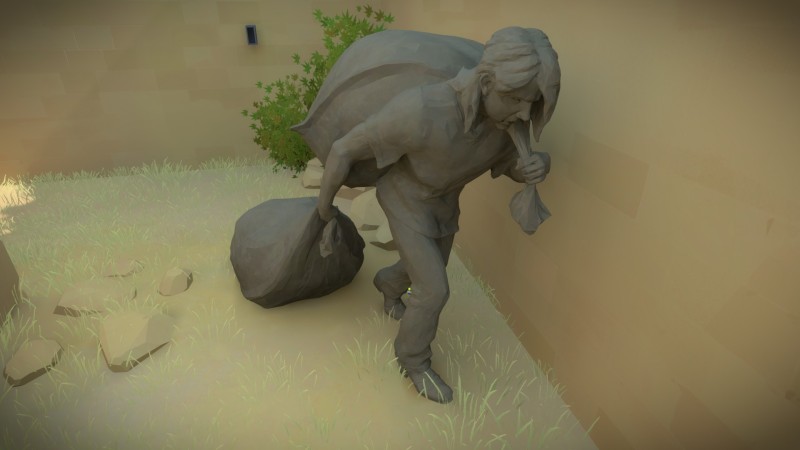 This lady has to carry around trash bags! Forever! She looks a little annoyed by this!

This pair of statues in the Keep area of the island are experiencing a moment of grim irony. The standing lady is dressed like a fencer, but her defeated enemy is not! It doesn’t seem like the lady on the ground expected her opponent to have a Real Life Medieval Sword.

The lady on the ground is simultaneously worried and trying to keep her cool. She wants to talk it out. Unfortunately, she won’t be able to, because everyone involved in this little tableau is now a rock.

The man on top of the mountain with the hammer isn’t so much sad as angry, but I bet if we sat him down with a cup of hot chocolate and told him everything was all right, he would spill his soul to us and let us know exactly why he’s trying to destroy this monument with a gigantic sledgehammer.

It’s probably because he feels inadequate. The monument he’s destroying probably represents Science or Faith or some shit. Hammer Man is probably living out some deep anguish he has re: this stuff, and it’s probably linked to his fears about being taken seriously as a man of muscle.

It’s okay, Hammer Man. Everything will be all right. Your muscles are pretty big, and you’re doing fine.

This pair of sad people can also be found on the mountaintop. There’s a yelling lady, and she’s yelling at a fearful dude who’s about to walk backwards off the edge of a cliff. The fearful man looks an awful lot like Ted Cruz. Very fraught!

There’s probably something deeper going on here, though…

…he’s holding a book! Given the rest of the shit in this game, it’s highly likely that the book represents his Bad Qualities, or his False Beliefs, or his Many Burdens which he should be surrendering so he can be peaceful instead. The yelling lady is probably all like, “SURRENDER YOUR MANY BURDENS!!” and he’s probably like “NO, I NEED THESE IN MY LIFE TO DISTRACT ME FROM THE GREAT TURMOIL IN MY TROUBLED SOUL!!!” And he won’t take her hand! What a fool!

This man and this lady are probably trying to remake themselves or their world through The Power Of Code, or Science, and they are sad because they are visionaries. Probably if all of us liked Science more, or were smarter, or had better attitudes about Art, these poor saints would not have to chisel themselves to death on this mountaintop.

Okay, now we’re getting into the good shit: all those statues which are reaching plaintively towards the sky. There’s a lot of them!

Perhaps the most plaintive one is Grail Reaching Man, who is kneeling miserably in the ruins of a museum because the one thing he wants– the grail– is just out of his reach. But wait… WAIT…

…HOLY SHIT!! If you look at his shadow, you can see that HE ALREADY HAVETH WHAT HE DESIRES! Another moment of crushing irony! If only this poor man would look at things from a different perspective, he’d see that what he has is already enough! 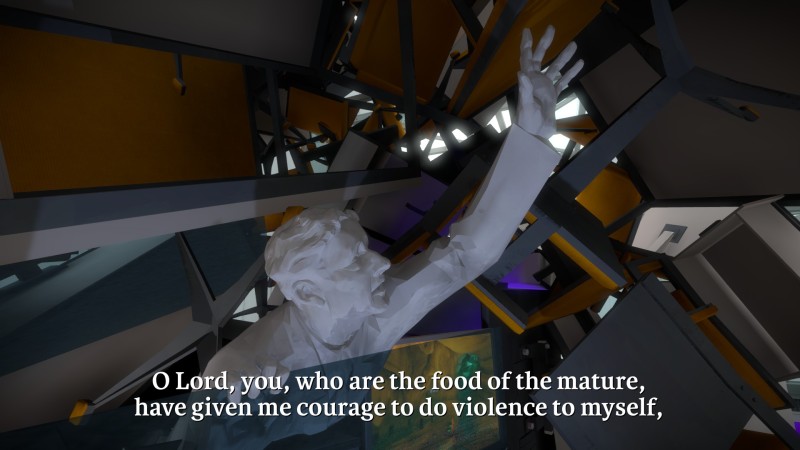 This man is in a very late area in the game. He is being crushed by a gigantic pillar made of desks and office equipment.

This is extremely subtle and deep– only the truest Seekers of Truth can decode this mysterious sculpture. I think I’ll leave you all on your own to puzzle out its profound secrets. 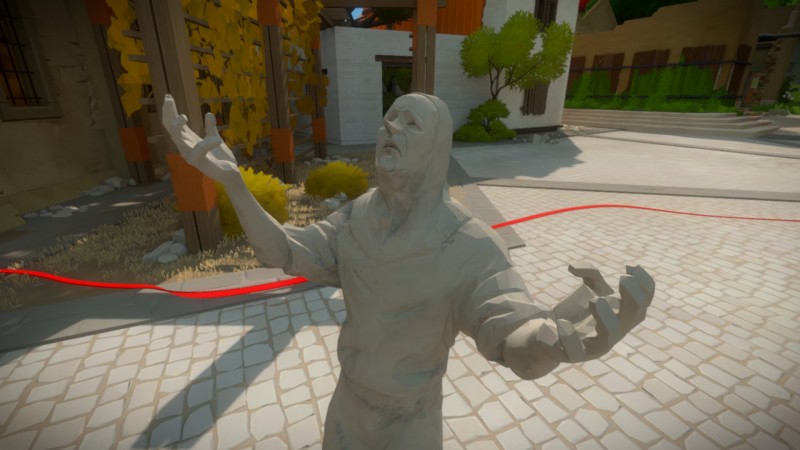 Wow! Look at that face!

I wonder what he’s afraid of. Let’s see…

This poor dog is not only made of rocks, but it’s completely, utterly alone, in the smallest and most forgettable corner of the island.