I recently participated in the Fermi Paradox Jam, a game jam organized on itch.io by Loren Schmidt and Katie Rose Pipkin, two creators I seriously admire. The jam encouraged people to make games inspired by or somehow related to the Fermi Paradox– a concept which tries to dissect why we haven’t yet met any space aliens. Even if we assume that very few planets can or do support life, space should be crawling with aliens, because space is full of planets. So why haven’t we met any of them yet?

My submission, The Galactic Snub, posits that all the aliens are hanging out in space together already and have simply chosen to ignore us. You pester them for explanations, and they give you excuses: 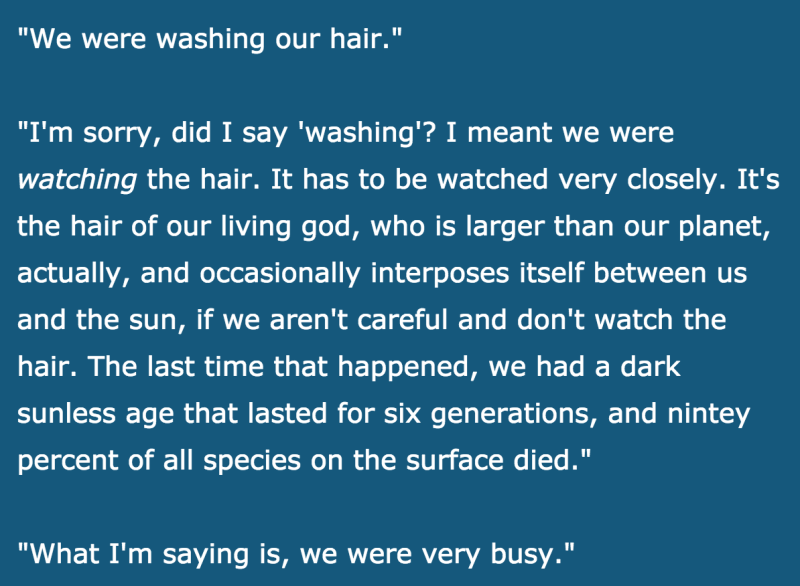 This game includes a background sound/music track by my friend Ford which is honestly the best sound I have ever had for any of my sound-including personal projects. Ford is looking to do more sound design! He did the music for Plus Ultra projects Slaughtertrain, Monstr, and The Ritual for the Mysterious Godforce Which Unites Us All, and he is pretty dang rad.

UPDATE: Someone has letsplayed my game!

The Echo Initiative, a cool, toy-like little satellite that you must puzzle out

The Fixed Stars: A Primer, by Loren Schmidt. A hypertext work that requires a little active exploration. Some really really nice stuff in here.

Hero and Leander, a pair of twitter bots who are searching for one another across the “space” of thousands of hashtags

No Stars, Only Constellations, a game about stargazing/disappointing your boyfriend, by Robert Yang

The Planets are Occupied by Living Beings, a deeply strange Twine game containing the fictionalized tale of a (historically real) Russian theoretical rocket scientist prophesying our ascension into space

Paradox is a surprisingly robust little space exploration/trading game with a command-line ship and docking-bay interface that I found rather charming. The UI and artstyle reminded me a little of Capsule, which I played in a state of profound anxiety for hours while lying on my friend Kent’s couch during a Los Angeles apartment search in 2014– and which has had quite a big impact on me, I suppose. It was fun to see reflected in Paradox here.

Anyway, there’s like 80 games in this jam, so I’m sure I missed some good ones. It was a really, really good jam prompt– both specific enough and open enough to inspire a lot of very very different and differently-interesting games. A+. The next game jam I’m likely to do is the Pippin Bar Game Idea game jam, which also has a ton of good good prompts.