Of course, I haven’t played EVERY Molyjam game this year. But I have played a nonzero quantity, and among those, these were my favorites.

It’s a randomized dungeon-crawler done IN TWINE. Very exciting! Far and away the most interesting-to-me submission in the entire jam. These guys were working directly behind me at the IGN office and I kept getting fascinating glances at their work whenever I got out of my chair. Definitely worth SEVERAL plays.

Haughty or Naughty captured my imagination in the same way that Drawception once did. It’s a magnetic poetry game/website which provides you with a poetry title, then gives you a series of suggestive words themed to that title, along with a bunch of more-ordinary words common to every poem. You arrange them to make a four-line poem, which other users then rate as “haughty” or “naughty.” I love the way words are themed to the title. There’s some great stuff popping up on this site right now. It’s given me a lot of neat ideas!

Back to the First Date

A comic about two time-travellers trying to fix the date they went on several weeks before. You click on the things they say, change them, and watch the changes propagate down through the panels of the comic. It’s a very cool way of presenting this kind of conversation gameplay! It reminded me a little bit of the memory remixing in Remember Me– but the comic layout makes it way easier to see all the changes and plan your decisions in this game. This is another one that gave me a lot of good ideas.

I of course have not played this game on its intended platform, as I’m not a swank motherfucker who owns a Rift development kit. However, I watched a video of it, and it was awesome. I love the verbs the player uses and I love the idea of a game about embarrassing the in-game dog owner and the player, simultaneously.

Scarred is simple but sobering . This game used the same prompt that my Twine story did. The creator of Scarred, Leo Burke, took it way more literally than me, however– and did a great job. The environments seem crudely-constructed at first, but are actually very effective at communicating a specific mood. The mazelike corridors and passageways made me feel trapped and lost. The scripted events at the ending are also pretty good. Make sure you read the quote through before playing. I personally picked this quote because, out of context, it seemed so important and significant. The creator of Scarred managed to tease the significance out of this quote much more effectively than I did.

This game isn’t actually finished yet, but it was demoed at the SF location and I was super impressed by what they had to show so far. Great art, an interesting puzzle mechanic, and effective micro-storytelling. You play a dog growing up alongside a young girl. You must protect her and keep her safe. Every screen depicts a major life event; you get to choose three actions per screen, and watch the results play out. Special action combos result in interesting events.

You Monster! is a game I made with a team at Molyjam 2013. It is a randomly-generated supervillain-base-destroying game.

You can find the most recent build of the game on our Molyjam page.

You Monster! includes a large amount of randomized text. I wrote all the text in the game and also did some of the pixel art. I also voice-acted the evil supervillain.

This was the first time I had worked on a non-interactive-fiction game at a game jam. It was an interesting, enlightening, and slightly frustrating experience to be part of a game jam team to which I could only contribute a few things. 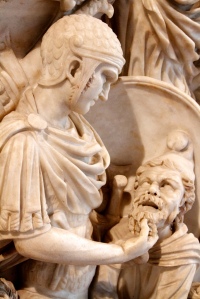 The Cursed Sword of Shagganuthor is a Twine story I wrote in less than one day for Molyjam 2013. It is a fatalistic horror story about scars.

You can read it at http://lauramichet.com/scars/

I’m currently at the Molyjam in San Francisco.

The prompts this year are not quotes from @petermolydeux, but actual quotes from actual Peter Molyneux. Here’s the full list.

I’m working on two separate projects here: a semi-roguelike based on this quote, with a team of eight: 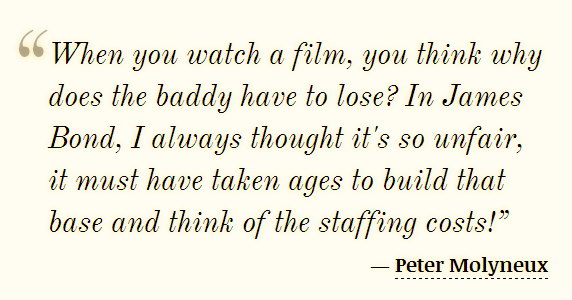 and a Twine story based on this quote. by myself:

I’m providing writing for both. Right now, the Twine story looks something like this: (click for bigger)

…while my contribution to the roguelike looks something like this:

You can watch us molyjam here.