This year I am attending both Pax East AND GDC, back-to-back. I am leaving Pax East on Sunday and attending GDC probably first thing on Monday morning.

I’ve heard of people doing this before, and they always say it is exhausting and draining and that two conventions in a row is too much. But I’ve been to Pax East every year since its inception, so I’m not stopping now. It’s practically the only time all year that I get to hang out with my friends from college, too.

On the other hand, I’m also very excited to attend GDC for the first time ever. I hope to see some great talks about narrative design, and I’ll be handing out flyers and/or answering questions at my company’s booth on Thursday. This is not the first convention I’ll be attending as a “real games industry member,” but GDC is a step above most other conventions in terms of relevancy and depth when it comes to my continuing education in games writing and industry stuff, so I keep thinking of it as my “first real convention.”

Kent Sutherland, my writing partner from Second Person Shooter, will also be at GDC. In the almost-two-years since we’ve graduated college, Kent and I both went from unemployment to for-reals games industry employment to “associate producer” positions, in two different Chinese games companies on two different sides of the Pacific ocean. It’s pretty bizarre how we were both able to get the kinds of jobs we wanted, despite the economy’s weakness, and that we’ve had such eerily parallel careers so far. I know he’s also very proud with what he’s accomplished, and it will be great for us to meet up at GDC again. 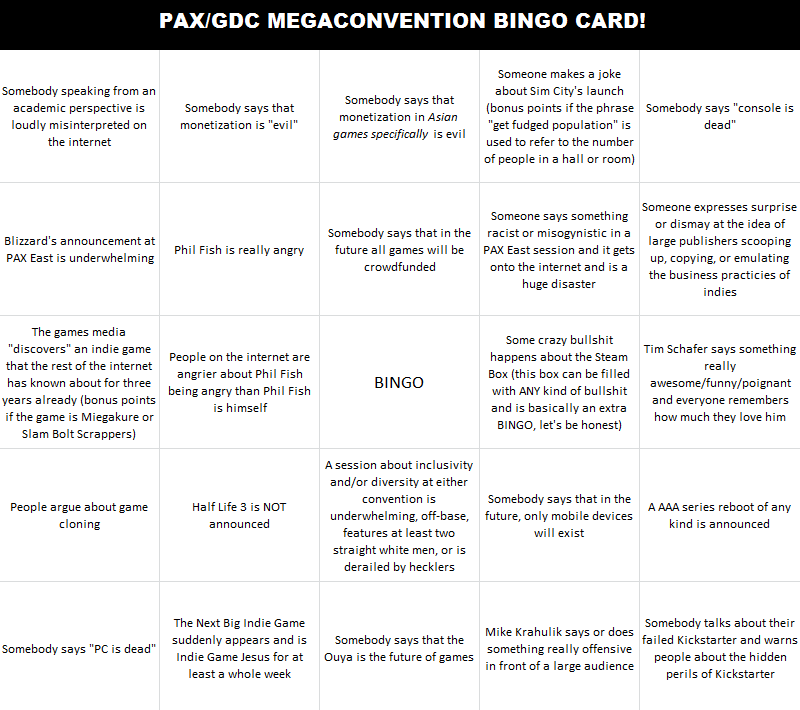 I of course will be playing this bingo game myself and will keep you updated with results.

Like Loading...
This entry was posted in Games and tagged bullshit, GDC, PAX, PAX East, the news, video games. Bookmark the permalink.